Our first destination is Batu Caves in Gombak, Selangor. Entering this area, we are greeted with typical Indian knick-knacks. Given that Batu Caves is a place of prayer for Hindus.

Before entering the main area, which stands majestically and towers a golden statue of Lord Murugan (source: Wikipedia), near the entrance, stands a green Hanuman statue. Nearby, is a clean and majestic Hindu shrine.

We went upstairs. At that time, many women, adolescents and children wore saris. Apparently there will be a wedding party inside the temple. I, who are very interested in Indian culture, don’t want to be left behind. I watched firsthand the Indian bridal wedding procession. Even though I’m just a tourist, I try to push my way through the crowd of invited guests.

Ooh, it turns out to be the same as the wedding scenes in Indian movies that I often watch. There is a procession around the fire and the clothes of the bride and groom tied. The wedding ceremony was also accompanied by traditional music that was immediately played near the wedding ceremony. Fun and memorable. 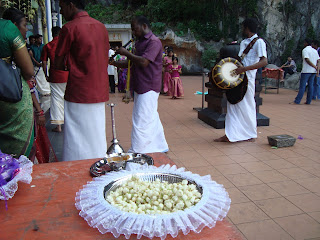 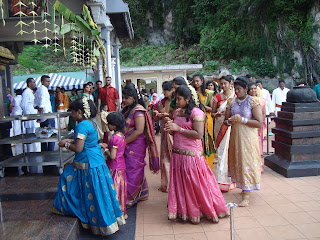 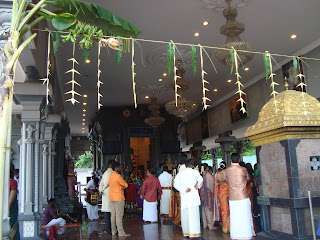 After the wedding ceremony was over, Indri and I entered the main area. An area filled with street vendors but well organized. The dominant traders sell Indian dishes and specialties. Included are also scattered sellers of sweets (sweet). Initially I wanted to try but after a while I didn’t feel like it. Hehehe.

One of my annoying experiences was when I approached one of the stalls but was instead told to go with the merchant. Speaking in Indian. The point is, you can’t go near their kiosk if you’re not shopping. Hadeeuh.

The funny experience was that when I was going out, I offered a souvenir to an old Indian merchant. Our interaction only uses sign language because he doesn’t speak Malay or English. He only spoke in Indian. When I bid, he used sign language back by placing his palm on his neck. The point is he can’t give me the price according to my offer because if he does, his boss can cut him. Ha ha ha. Hilarious.

That’s the fun of traveling. Can find unexpected things.