Theatrical performance “Flower of the End of the Century” 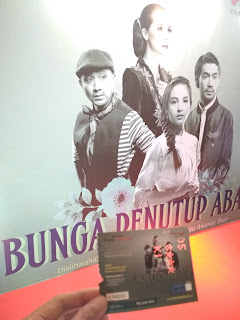 Alhamdulillah, on Saturday, November 17 2018 evening or Sunday night, I finally had the opportunity to watch the performance of the Bunga Tutup Abad theater. Since the announcement of this performance was uploaded on the Titimangsa Foundation Instagram account, I was immediately interested. But unfortunately at that time the only remaining tickets were class 1 and VIP and VVIP. My pocket can’t reach it. I thought okay, it seems my wish for a long time has not been able to come true.

Until finally at the end of October, Titimangsa Foundation again uploaded information on Instagram that there were still Class II and III tickets. Looks like it was a ticket that the customer didn’t pay for until it passed the specified time limit. I quickly opened the website. The remaining quota was only a few seats, a little late and immediately ran out. At that time, I wanted to order Class III but it ran out immediately. Finally, choosing Class II, which costs Rp. 100,000 more than Class III or Rp. 300 thousand. 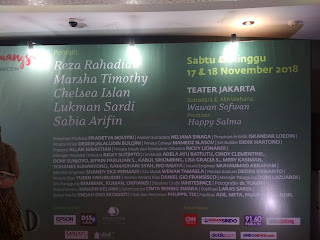 I went to the Jakarta Theater at Taman Ismail Marzuki since the afternoon. Because I took the busway, the route I took was rather long. The audience was asked to come an hour earlier. At 19.00, I exchanged the e-ticket at the counter and went straight to the lobby of the Jakarta Theater. At 19.55, the audience had entered the theater, waiting for the show to start. 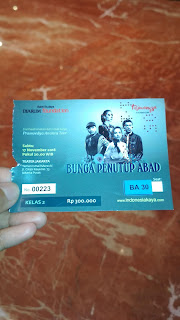 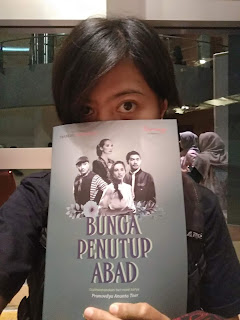 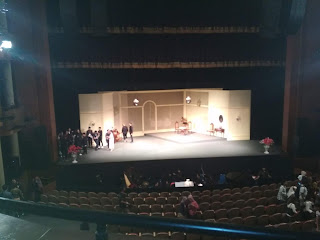 Before the show starts, the rules are read out for the audience. One of them is prohibited from recording. The opening scene begins with Minke reading a letter from Panji Darman announcing Annelies’ situation. The letter was read by Minke to Ontosoroh.

Panji Darman was sent by Nyai Ontosoroh to follow Annelies’ journey to the Netherlands. Annelies was sent to the Netherlands after Ontosoroh lost at the white court in Surabaya. The atmosphere of the ship where Panji Darman was writing the letter was illustrated by the sound of the waves hitting the walls of the ship and the sails showing the blue sea water in the middle of the ocean.

Scene after scene bewitched the audience. The acting skills of the players are extraordinary. The character who has always been my idol is Ontosoroh. At first I didn’t have high expectations with Marsha Timothy. For me, the most appropriate as Ontosoroh is Happy Salma. But Marsha paid off my doubts with such stunning acting. She is so stunning as a concubine who has been tempered with the problems of life. Marsha Timothy’s gestures, dialogue intonation, and speech style really depict Ontosoroh.

Reza Rahadian has no doubt about his acting skills both on the big screen and on the stage. He nailed it.

There was a scene that made me cry. One evening, Annelies sat her mother on a bench outside the house. Annelies also asked about her mother’s past. Ontosoroh tells how she became the mistress of Mr. Herman Mellema. That’s where I cry. How low the value of women in the eyes of men. In the face of male power, women become very helpless.

For all the treatment she had received from her parents, Ontosoroh became vindictive and later became a woman who was firm, tough and brave to oppose injustice.

Another crying scene is at the last second, when Panji Darman announces that Annelies has died in the Netherlands. For Ontosoroh, Annelies is a victim of colonial crimes. He felt that the Dutch colonialists had taken everything valuable from him. That’s where he then cried uncontrollably, crying losing the daughter he loved so much.

The portions of the scenes for Ontosoroh and Minke are indeed more than the other players. May Marais (Sabia Arifin) appeared in only a few scenes during the 2.5 hour show. May is the son of Jean Marais and becomes Annelies’ playmate. I also like Jean Marais (Lukman Sardi) ‘s conversations with Minke. Jean reminded Minke to remember his roots and not to overly praise the system implemented by the colonial government.

The stage setting reminds us of the old building houses. There is a record player in the corner of the house of Ontosoroh. Wicker chairs and chandeliers. The lighting also supports the stage setting like in the past. The orchestral music accompanying the show was super cool too.

At the end of the show, when the host announced the names of the players and crew, the applause echoed endlessly. I am one of the audience whose applause is loudest and longest. Ha ha ha

I think if Pramoedya Ananta Toer were still alive, he would be proud of this show. May the light of your grave, Mbah Pram. And to the cast, director, producer and all crew, thank you for putting on such a dazzling show!