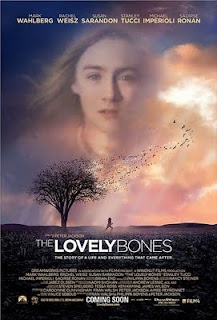 Director     : Peter Jackson
Player         : Mark Wahlberg, Rachel Weisz, Susan Sarandon, Stanley Tucci, Michael Imperioli, Saoirse Ronan
Year            : 2009
Books and movies, those are my medication and consolation. So this writing is just for reminder about the movies I have watched. Not only the recent movies, but I usually watched movies were released years ago.
This film tells the story of Susie Salmon (Saoirse Ronan) who was killed when she was 14 years old. Susie Salmon is a cheerful and beautiful teenager, that’s probably one of the reasons Mr George Harvey (Stanley Tucci) killed her.
Mr Harvey is a neighbor of the Salmon family whose home is only a few meters away. I don’t know what reason Harvey killed Susie after trapping her in a cornfield. He has psychopathic tendencies. Because it was proven that he had not only killed Susie, but many lives that had been lost, and all of them were women.
The film’s story is adapted from the novel by Alice Sebold of the same title. Susie’s murder cost her family a lot. The relationship between Jack Salmon (Mark Wahlberg) and Abigail Salmon (Rachel Weisz), Susie’s parents had been stretched. Even her mother was away for a while, working out of town to comfort her over Susie’s loss.
Initially no one knew who killed Susie. The charges never leveled against Mr Harvey. But the smartest the evil is covered up, it will smell too. It started with the suspicion of Susie’s sister, Lindsay (Rose McIver). Lindsey tries to prove her suspicion that her brother’s killer is Harvey. Was Lindsey able to find evidence?
In this film, Susie Salmon tells her own story about her life and until her murder which is said to have occurred on December 16, 1973. She is indeed dead, but her spirit is still floating somewhere with other victims because her body has not been buried. His body was apparently stored in a safe by Harvey and then to remove the traces was taken to the stockpile.
The lesson from this film is that crime fetches its own reward. No matter how clever it is to be hidden.