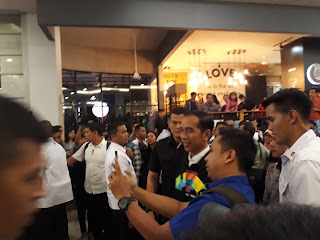 I visited Pekanbaru, Riau for the first time on Monday, May 7, 2018. I was there for three days and two nights in the context of the task of covering the Hanura Party’s national work meeting (Rakernas).

I’m always excited about being assigned out of town, especially to cities that I’ve never visited before. Pekanbaru is the second city on the island of Sumatra that I have visited after Medan a few years ago. Work is what can make me stop in various regions.

In Pekanbaru for the first time I could see the face of President Joko Widodo (Jokowi) from a fairly close distance. Alhamdulillah I finally met the President .. hahaha .. I’m happy because I idolize Jokowi.

Jokowi arrived in Pekanbaru at around 18.00 and headed straight to the Novotel Hotel. That night, 10 Hanura Party leaders were scheduled to meet Jokowi at Novotel. The group of journalists followed at Novotel.

Due to the tight security, we were welcome to wait outside. When going to have dinner at the mall next to the hotel (Mal Ciputra), mall visitors gather quite a lot in the lobby of the mall. Have an investigation, reportedly Jokowi will shop at the mall and greet residents.

The group of reporters canceled their dinner in the mall and finally diverted to the Day Night food court across the mall. An hour later I returned to the mall following some of my friends. And apparently Jokowi was on a doorstop. I ran into the lobby and managed to penetrate the crowd of visitors and Paspampres.

It was there that I first saw Pak Jokowi’s face. I think he is simple and friendly. Patiently, he also serves requests for group photos or selfies with visitors. The visitors also called out the name of the President so that Jokowi would grant his selfie request.

Arriving at the exit and the side of the road, visitors continued to follow in the hope that they could take pictures with the seventh President of RI. That night I didn’t intend to take a photo together. The most important thing is I can see the President and be able to take part in interviews and get news. Ha ha ha