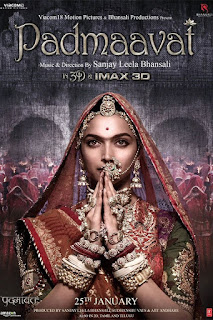 I don’t know why characters with Muslim backgrounds in Bollywood films are often depicted as not being terrorists, so they must be bad people. I also felt the same thing when watching the film Padmavaat. The Sultan of Delhi, Alauddin Khilji (Ranveer Singh) is described as a cruel, crooked and greedy figure. Alauddin killed his uncle, Jalaluddin Khilji, who was the Sultan of Afghanistan, in order to control the Sultanate of Delhi. I don’t know whether this film is objective in describing historical facts or not. Because honestly I don’t understand the history of Alauddin Khilji. I have a lot to look for references on this matter.

Apart from that, I really like this film. Sanjay Leela Bhansali’s films always amaze me.

Padmavaat centers on the story of Maharani (Queen) Padmavaat (Deepika Padukone whose beauty is described as very beautiful. Anyone who sees her will fall in love. Padmavaat is the daughter of the king of Sinhala (Sri Lanka) and married to Raja Melwar of Rajput, Ratan Singh (Shahid Kapoor).

Alauddin was fascinated by the beauty of Padmaavat which was told by the priest Rathan Chetan. Chetan was previously a Rajput royal priest and lived in Chittor, but was kicked out for peeking at the king and queen while alone in a room. Chetan also betrayed and became a close person to Alauddin.

Chetan told Alauddin that if he wanted to rule the world, he had to have Padmaavat. Alauddin attacked Chittor and managed to host Ratan Singh by taking him to Delhi. The goal was for Padmavati to come to Delhi to release her husband.

With his intelligence, Padmavati strategized. She managed to bring her husband back to Chittor without showing his face to Alauddin. This success is also helped by Alauddin’s wife, Mehrunnisa (Aditya Rao Hydari). Mehrunnisa is the daughter of Jalaluddin Khilji.

Enraged, Alauddin returned to attack Chittor. Ratan Singh is killed. In order to keep his honor, Padmavati did Jauhar, plunging into the well of fire. Thus, he would not be able to surrender himself and his honor to Alauddin. He and Ratan’s first wife, Ratu Nagmati, along with the women whose husbands fought to do Jauhar.

I like the Padmavati character. She is a smart, loyal, strong and authoritative woman. Meanwhile, I don’t really like the figure of Mehrunnisa, who in my opinion is the type of woman who is easily bullied hehehe ..

Padmavati is a figure in an epic poem written by the Sufi writer Malik Muhammad Jayasi in 1540. So I wanted to read his book.

I love this film 4 stars. I like the setting, the costumes of the players, everything is cool. Sanjay Leela Bhansali is my all time favorite Indian’s film maker.