A Narrative of Power and Politics 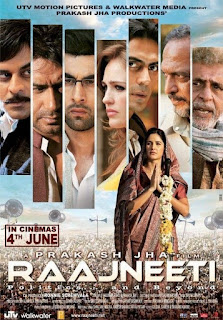 Rajneeti or literally in Hindi means politics is the second film that I watched in this opening month of 2018. The film genre I like is indeed action and has elements of political stories like this.

The film centers on the power struggle within India’s all-powerful party, Rashtrawadi. The figures who are at the helm of this have family ties. Initially Rasthtrawadi was led by Bhanu Pratap. Unexpectedly, Bhanu Pratap suffered a stroke while giving a speech in front of his cadres.

He also tried to maintain his position and took Sooraj (Ajay Devgan). Sooraj is Bharti’s biological son with the leader of the left party, Bhaskar Sanyal (Naseruddin Shah). Because of the extramarital relationship, after Brij Gopal (Nana Patekar) was born, Bharti’s brother dumped Sooraj in the Ganges River. Ram Charittar adopted and looked after him, who came from a poor family. Ram works as a driver at Chandra Pratap’s house.

This film is full of very cruel political intrigue. Between these two camps tried to maintain their power in various ways even though many lives were sacrificed.

The atrocities started when Chandra Pratap was killed in his car. Samar, who is an American graduate, then designs various ways to maintain his family’s power and has the ambition to make his brother Prithvi the Prime Minister.

After Veerendra succeeded in capturing Rasthtrawadi, Prithvi formed a new Jan Shakti party assisted by his younger brother and uncle, Brij Gopal (Nana Patekar). Brij’s role in this film is quite central.

In order to get campaign capital, Prithvi is forced to marry Indu (Katrina Kaif). Indu actually loves Samar. But Samar insists on marrying Prithvi. Indu’s father also has the ambition to marry off his son to a candidate for prime minister.

With various political intrigues for power and after many lives were sacrificed, it was Indu who later became prime minister. Prithvi was tragically killed in a car bomb attack on his home. The incident also kills Sarah, an American who is Samar’s lover.

Rajneeti narrates that politics is not black or white. Everything is gray. The characters are in a gray circle. We never know who is the antagonist and protagonist. All the same.

Although the duration of this film is quite long, 2 hours 49 minutes, it is not boring. I give rate 9 out of 10.