I passed Ramadan 1439 H / 2018 AD in Jakarta. This is the first time fasting overseas after graduating from college. It means overseas outside the region. Because previously for 6.5 years I had also migrated but I still had an area with my house that could be reached in 1.5 hours.

The first time I fasted in Jakarta, I felt sad because I wouldn’t be able to break fast with my mother at all during Ramadan. In the past, while living in Mataram, you could come home every week to see your mother.

I am committed that my work should not hinder my worship in this holy month. Especially tarawih prayers. As much as possible, it should be time for tarawih. I also planned a safari to the mosques that were close to the location of my last coverage. It was in the mosque that I would tarawih.

On Monday, May 21 2018, I finished my coverage at the Komnas Perempuan Office before sunset. The opportunity for me to visit the Sunda Kelapa Mosque, Menteng, Central Jakarta. That night finally Tarawih there. The distance from the Komnas Perempuan office to the mosque is quite close, about 500 meters. I also walked there. 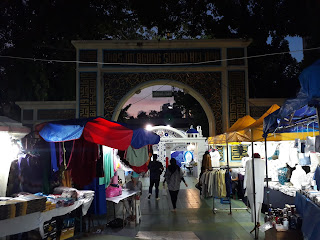 Around the mosque there are many traders who sell various foods and takjil. Likewise in the courtyard of the mosque which was filled with Muslim clothing traders. This is my first time visiting the Sunda Kelapa Mosque. 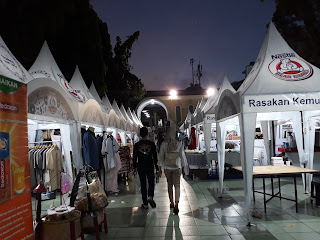 It seems that the big mosques in Jakarta are filled with traders during Ramadan. I also met the same thing at the Al Azhar Grand Mosque, South Jakarta. But here are mostly food vendors. 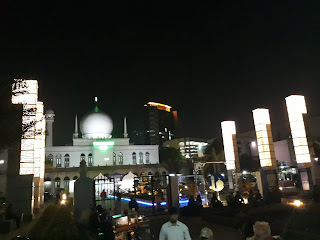 There were unexpected things that made me very happy when I went on a safari to the Great Mosque of Al Azhar, Tuesday (22/5) night. After doing my ablution, I went upstairs where the congregation was praying. That night the congregation had finished the Isha prayer and the lecture before the tarawih had started.

I said to myself, “This preacher’s voice is familiar to my ears? But who is it?” After I looked and looked at the screen in front of me, it turned out that Mr. KH Nazaruddin Umar, the high priest of the Istiqlal Mosque. Masha Allah. I’m so happy. He is one of my idol scholars. I often participate in his recitation at the Gates of Heaven in Indosiar. 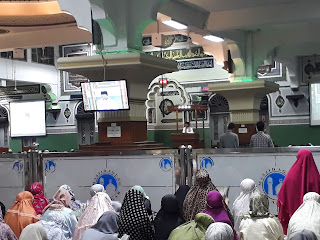 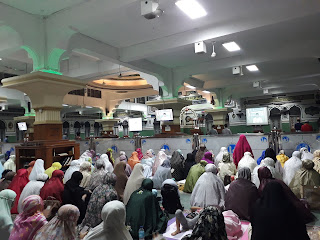 In my opinion, he is a very gentle scholar and the content of his lectures is always soothing. How happy it is to hear his lecture directly.

That night he told about Abu Hurairah ra who was visited by thieves several times while guarding Baitul Mal. It turned out that those who came to the Prophet’s companions were not thieves from among humans but demons in human form. The third time he was visited, Abu Hurairah canceled his arrest of the thief even though the Prophet Muhammad had asked him to. The reason is because the thief taught him the Kursy verse because Abu Hurairah thought the thief was actually a knowledgeable person. He only found out that the devil was approached after being told by the Prophet Muhammad. The demon is the boss of the demons.

The moral lesson, we should not easily judge people by their outward appearance. Satan often uses the robe of angels to deceive humans.

KH Nazaruddin Umar asked us to be careful and not to be fooled by appearance.

“What happened to Abu Hurairah can happen to all of us,” he ordered.

He also said that the higher the level of one’s spirituality or faith, it does not make that person free from Satan’s temptations. They will be seduced by the demon commander.

“Ordinary criminals who never pray and worship are the ones who tease the devil’s soldiers,” he said.

“People who too reconstruct their closeness to Allah, who deliberately dress themselves up and appear as great scholars and so on, are careful. Not necessarily those who look angels are also angels. There are people whose hearts are rotten but their mouths are very sweet and vice versa.”

That was the message that hit Pak Nazaruddin Umar’s lecture. We are also reminded to be careful when making friends. In particular, he also advised the citizens of Jakarta to learn from experience and not to be easily divided.

May Allah accept our deeds of fasting in this holy month. Aamiin.