The distance between my travel writings to Kuala Lumpur-Singapore, the second and third parts, is very far. After years, I finally took the time to write again. Hahahah … This article is also to pump up my enthusiasm so that I can save more actively to realize my next travel plan.

There are many stories and stories when I first set foot abroad, even though it was just Malaysia and Singapore, but that was one of the achievements for me because the dream of going abroad was achieved. It’s not wrong if the plane I was traveling on landed at KLIA 2, my eyes filled with tears. From the plane window, I saw the green expanse of oil palm plantations along the land. Inside I said, “O Allah it is foreign and soon my feet will step on the land.”

I cried and secretly wiped my tears because I was embarrassed to be seen by people. I remember my late father and whispered, “Bapak, your son has arrived overseas. Not being a migrant worker but here on vacation. It’s cool, right?” And I’m even sadder because I can’t tell you about my travel experience directly with you.

Alhamdulillah, our plane landed smoothly in the afternoon. At that time Indri and I immediately took the bus to KL Sentral. Eat and take a short walk then we continue by LRT to the Bukit Bintang area, where we stay. After several times asking here and there, I finally found the hotel.

Second day in Kuala Lumpur, our first destination was Batu Caves with its iconic tall gold statue. When we were in KL Sentral and waiting for the arrival of the MRT, Indri and I met a couple from Spain, if I’m not mistaken, their names were Patricia and Daniel.

Because our goal is both to Batu Caves, we finally made a pact to continue together. The four of us became close. From Batu Caves, we followed them to Masjid Jamek, the oldest mosque in Kuala Lumpur. Because it was Friday, tourists were not allowed to enter because the Friday prayers began soon.

I, Indri, Patricia and Daniel then headed for the Sultan Abdul Samad Building. The location of this building is right in front of the Merdeka Square. At that time there was a culinary festival in Dataran Merdeka, and we had lunch there.

From Dataran Merdeka, we headed to the Little India area on foot. We entered several shops selling Indian jewelery and accessories but bought nothing. I just looked at the products being sold there, were they the same ones I usually find in Indonesian shops such as soap, shampoo, and others. If there was something similar in Indonesia, Indri and I would laugh at it. Ha ha ha. 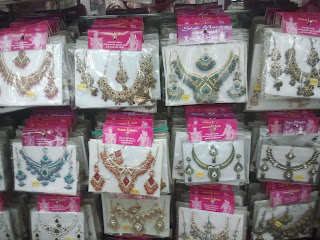 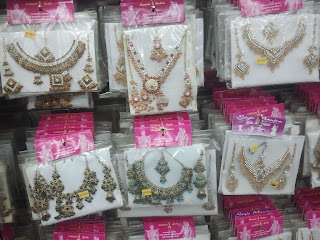 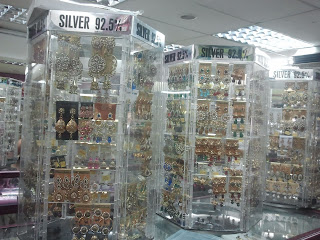 Accessories that are usually worn by Indian women at parties

After accompanying Patricia to decorate the back of her hand with Henna, we took the LRT with the aim of Masjid Negara Malaysia, a kind of grand mosque in Indonesia. I and Indri will pray noon there. 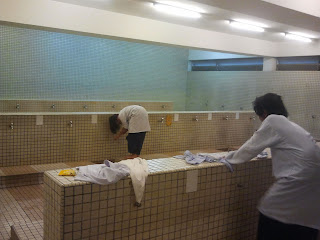 At that time, Daniel and Patricia asked if they could come in. But unfortunately at that time they were banned by the officers at the mosque. It was raining very hard at that time. We parted ways and they said they would wait for us at the station.

Indri and I prayed and the rain grew heavier. We have been in the mosque for a long time. I thought of Daniel and Patricia who were waiting for us at the station. They must be upset and angry. Even though they were very kind to accompany us to the mosque for prayers. Unfortunately at that time we forgot to exchange contact numbers that could be contacted.

When Indri and I returned to the station, I looked for Daniel and Patricia but there was none. I looked around, around the station, but to no avail. Maybe they left feeling annoyed that they had waited so long for us.

I’m sorry I lost them. I also tried searching through social media but to no avail. At that time they saved my email address, but the email was not there.

I want to apologize to them. For making them both wait a long time and apologize for not being allowed into the mosque at that time. Honestly, I still have guilt until now. By the way, Patricia is a policeman in the city where she lives. At that time, Daniel also told me that in his area there were many Muslim inhabitants and there were still legacies of Islamic civilization there. They come from a small town quite far from Barcelona, ​​but unfortunately I forgot and didn’t take notes.

Patricia and Daniel, wherever you are, I beg you my pardon. Forgive me!