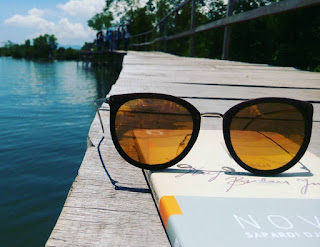 “That compassion believes in silence.”

The June Rain is one of Sapardi Djoko Damono’s poems. And in 2015, a novel with the same title was published. Rain in June (Novel) is the 12th book I read in 2016. This book is not thick, only 135 pages, so I finished it in about two hours.

The June Rain tells the story of Sarwono, a lecturer at UI who falls in love with Pingkan, and they both fall in love, you can say that. Pingkan also teaches at the same campus, only different faculties. Sarwono and Pingkan both come from Solo. However, there are differences that become obstacles to unifying their relationship, namely differences in religion and family background.

Sarwono is truly Javanese, while Pingkan is said to be of Manado descent. Although actually his mother is of Javanese descent. Having lived in Makassar for a long time, Mrs. Pingkan or Bu Pelenkahu did not feel that she had Javanese elements. Pingkan was also confused about her roots, whether she was Manado or Javanese.

Actually, Sarwono’s nuclear family (father and mother) did not question their relationship with Pingkan because Sarwono was considered to be able to choose his own wife. Likewise with Pingkan’s mother (her father has died). But the problem is the extended family that often provides input and comments.

Sarwono was so worried that Pingkan would be attracted to Japanese men after the woman continued her studies in Japan. Can the relationship between the two continue to the level of marriage? Will they be able to advance to the next ladder after overcoming various obstacles?

“Fate is left to humans to work on, but destiny must be signed on the seal and should not be sued if something happens, good or bad.”

Actually the theme of the story of this book is quite simple, just a love story of two lovebirds with different backgrounds. But mixed with interesting language, simple language, not lyrical but still poetic. There is also a section that is written without periods and commas, but still interesting to read. This book closes with a poem entitled Tiga Sajak Kecil which is very beautiful. Maybe this is how if a great writer makes a work, no matter how simple it is, it will still be very interesting.

“Loneliness is the fine threads of a silkworm that slowly, sheet by sheet, lock up people so that the caterpillar in them wants to quickly break away into a completely different form, which may no longer remember its origins. Only a rotten caterpillar doesn’t want to be a butterfly. “

“How could anyone have the desire to untangle countless threads in a handkerchief which he has woven himself. How could a man suddenly be liberated from a network of threads that stacked, cross-legged, overwritten neatly on a handkerchief that has woven itself for years by his own steadfastness by his own breaths and breaths by the specks of time in his own mind by her own longing for her own appreciation of the complicated relationships between men and women who live in a soundproof room called affection. How could it be.”