In his speech, Jokowi emphasized improving bureaucratic governance, particularly regarding investment licensing. Jokowi also touched on the focus on human resource development that will be carried out in the second term of his administration.

Jokowi also emphasized the importance of maintaining unity. The progress and welfare of the nation can be achieved by being united and supporting each other. On that occasion, he also emphasized that he would not give a place for intruders to Pancasila in this country. Jokowi’s speech was greeted with cheers by his supporters. 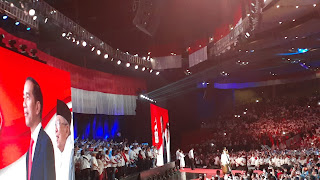 KH Ma’ruf gave a speech as well as closed his victory speech by reading a prayer. Similar to Jokowi, Ma’ruf emphasized national unity in his speech.

The former General Chair of the Indonesian Ulema Council invited all parties to take care of Indonesia. Strengthening the joint building called Indonesia. At the end of his speech, Ma’ruf invited all attendees to sing the song Padamu Negeri. He also closed the speech with prayer. In his prayer, Ma’ruf asked for strength in leading Indonesia for the next five years. 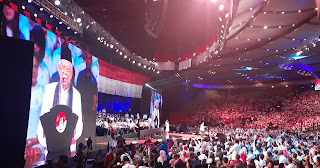