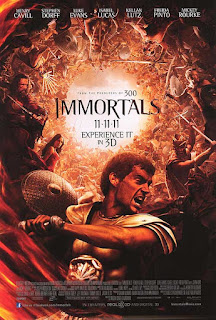 I am in love with Theseus, but not Superman. LOL. I prefer Cavill on this movie more than on Superman.

“Deeds are immortal, not flesh (raga).” 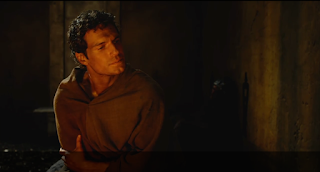 The opening scene in the film is the liberation of Titan by King Heraklion, Hyperion (Mickey Rourke) in the dream of an Oracle, Phaedra (Freida Pinto).

In the dream, King Hyperion is looking for the Bow of Epirus to rule over mankind. Epirus’ bow was a weapon beyond imagination.

After the battle in the sky occurred, the Titans were then imprisoned. And either the victors of war or the Immortals declared themselves to be gods. Those who were conquered were named Titans and were imprisoned forever in the bowels of Mount Tartarus.

Hyperion then came to the Sybelline monastery but was prevented by the priest because the monastery was a holy place. With his arrogance, Hyperion said he would end the power of the gods. He was disappointed in the gods because when he needed help, the gods did not come to help him.

“Pray to the same god, who is lazy to act when my wife and children get sick. I also cry to the layers of the sky for help. But it wasn’t pity, I just found solitude and watched my family vomit in agony like animals until they died. Your god will not insult me ​​anymore !, ”he said loudly to the pastor, who then burned him alive.

Hyperion then managed to reclaim Sybelline monastery. In achieving their goal of possessing the Bow of Epirus, Hyperion’s army destroys every sacred shrine. A defector from Hellenick is used by Hyperion to gather information about Hellenick and his troops.

Theseus is a peasant boy from Hellenick. He has been trained since childhood to become a knight by the Old Man (John Hurt) who is the incarnation of the god Zeus (Luke Evans).

According to Zeus, Theseus was one of the people who could defeat Hyperion. Theseus is even more angry with Hyperion after witnessing his mother being killed by Hyperion.

The battle between Hellenick and Heraklion was inevitable. Hyperion’s army comes to Hellenick and Hyperion frees Titan with Epirus Bows. Zeus and Athena (Isabel Lucas) step down to help fight Titan.

Although called an infidel who did not believe in gods, Theseus gave his life to save mankind and gain a place among the gods. They rewarded his courage with a gift from a child, Acamas.

“The war against evil will never end. War will come to the layers of the sky, “said the message of the Old Man to Acamas, the son of Theseus with Phaedra. In the end goodness will always win.