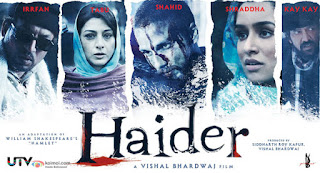 The film opens with a time setting in 1995 in Srinagar. At that time, the rebellion of Kashmiris who wanted to separate from India was rife. Indian police patrol the area and any citizens suspected of being part of the separatist movement are arrested and never return to their families.

Likewise with Hilal Meer (Narendra Jha), a doctor who was later arrested for operating on a rebel leader. Previously Hilal had warned his wife Ghazala (Tabu) that if he carried out the operation, his village would be destroyed and would be targeted by the police. Ghazala asked Hilal which side he was on, the rebels or the Indian government, then he only answered briefly, “On life”.

Hilal never returned to his family. Ghazala is deeply grieved, and the only hope that keeps her alive, her son, Haider (Shahid Kapoor). He is very worried that Haider will become an extremist group.

“All of Kashmir is a prison. I will look for it anywhere, “said Haider.

Haider tries to find his father. In the end he meets someone named Roohdaar (Irrfan Khan) who promises to give him information about his father’s whereabouts. Roohdaar is a member of a separatist group who is also imprisoned with Hilal. But he survived. From Roohdar, it is known that it was Khurram Meer (Kay Kay Menon), Hilal’s younger brother who arranged for Hilal to be arrested. Khurram is called the spy of the army and Ghazala is the spy of Khurram.

Ghazala’s worries come true, Haider is very angry about what happened to his father. Especially after the death of his girlfriend, Arshee (Shradda Kapoor), he feels stressed and finally gets into the separatist group. In addition, Khurram Meer later managed to marry Ghazala.

Will Haider succeed in getting his revenge on Khurram? The film’s story is an adaptation of William Shakespeare’s Hamlet. In this film I really like Taboo’s acting.

At the end of the film, it is explained that in the last two decades thousands of lives have been lost in the Kashmir conflict. It has been relatively peaceful in recent years and gives new hope. With tourism increasing from 4.2 million visits in 1995 to 140 million tourists in 2013.