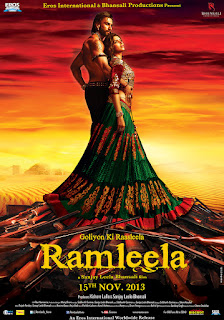 “The soul can never be split with any weapon. Besides that, it cannot be burned by fire. Or wetted by water. “

“Even the sea drowning in pride does not know that one day it will become a barren desert, if the sea cannot sustain its pride then what is the difference between us and them”

This film is adapted from the story of Romeo and Juliet by William Shakespeare which tells the story of the romance of Ram (Ranveer Singh) and Leela (Deepika Padukone) who come from different clans. For five hundred years, the Sanera and Rajadi clans were enemies. As a result of this hostility, there was a lot of bloodshed, business was hampered, people lost income and also life.

Ram comes from the Rajadi clan and Leela from the Sanera clan led by his mother, Dhankoor Baa (Supriya Pathak Kapoor). The female leader of Sanera is called Hujoor. The peak of hostility began with the mutually killing of Ram’s brother, Meghji (Abhimanyu Singh) and Leela’s brother, Kanji (Sherad Kelkar) which resulted in revenge. Ram actually doesn’t want any revenge, but after his brother-in-law, Kesar (Bharka Bisht Sengupta) harasses a group of men from the Sanera clan, he gets angry. Where previously Leela’s sister-in-law, Rasila (Richa Chadda) also received similar treatment from a group of men from Rajadi when she came looking for Ram.

“If we sacrifice revenge, then the barren desert will bloom flowers”

If anger and revenge can turn the ocean into a barren desert, then true love can make flowers bloom here too.

Due to hundreds of years of enmity, Ram and Leela’s love cannot be united. In the end they sacrificed themselves by shooting at each other. The two clans unite which is marked by the Dassera ceremony, a celebration of burning the demon statue of Ravana. For the first time in five hundred years, Rajadi and Sanera celebrate Dassera together. After that Ram and Leela were buried together.

It is stated at the end of the story that Ram-Leela’s last shot, fired with affection, echoed throughout the Ranjaar area, and there has been no gun battle since. No more houses were burned, only lights were on.