From the courtyard of the Cathedral Church, I heard the chanting of the Koran

One morning on Sunday, 24 December 2017, the sun was shining quite hot in Jakarta. On the day leading up to Christmas celebrations, the road in front of the Cathedral Church and the Istiqlal Mosque was quite crowded. Police officers have started to come and stand guard in preparation for Christmas security and also help smooth traffic flow.

I entered the courtyard of the Cathedral Church. At first I was a little worried, of course because I was wearing a hijab. I’m afraid people will stare at me when I enter the cathedral courtyard. Understandably, this is my first time covering Christmas preparations and my first time to the Cathedral Church. It turned out that after I entered, there were several journalists who were also veiled.

After the interview and monitoring of Christmas preparations and busy writing the news, I remained silent inside the Cathedral. Because I have to monitor and cover the Christmas Mass which will be held from the afternoon to the evening.

The proximity of the two places of worship for these two religions is clear evidence that our society has a high tolerance for differences. That’s how it should live, side by side and support each other even though we differ in beliefs. It is very unfortunate that there are still irresponsible people who are sometimes busy and like to play each other on the basis of different beliefs.

Not just a building. During the celebration of religious holidays, Istiqlal Mosque will open its parking lot for Christians who will attend mass at the Cathedral. Likewise, during Eid al-Fitr, the cathedral will allow its yard to park the vehicles of Muslims who will pray for Eid.

That afternoon I felt so close to my Lord, Allah SWT. From my seat in the church yard, the strands of reading the holy Koran were clearly heard echoing from the Istiqlal Mosque. Chant is very melodious, like water flowing calmly through the rivers of my soul. My tears almost spilled. I got goosebumps. I never stopped praising Him, Glory to You, O Allah .. I whispered at that time.

Approaching the celebration of the first mass at 17.00 WIB, I entered the main worship room of the Cathedral Church. At that time, Yudi Latif, the Head of the Presidential Work Unit for the Development of Pancasila Ideology (UKP-PIP), delivered his speech in front of Christians from the pulpit. There is also the UKP-PIP Steering Committee, Try Sutrisno.

Yudi delivered a speech about tolerance and diversity which drew boisterous applause from the congregation. Yudi Latif wears a black cap and turban that is draped around his neck.

“We have come to continue our feelings. Share happiness and hope and love in the Christmas atmosphere in all cathedrals and churches in the country,” he explained at the time.

So far, suspicion has often arisen among religious communities. He analogized this as a dry branch that could easily be ignited and caught fire. “The branches are flammable. And the ground is starting to split. Christmas is a kind of rain and love that will water the dry grass back green and bring Indonesia back green,” he said.

The moral message of Christmas is to invite people back to the principle of love, which is the core teaching of religion. He said that each of us, Indonesian citizens may have different religions and beliefs. And Pancasila guarantees every citizen of all religions to express their beliefs.

At the end of his speech, Yudi conveyed with the spirit of love for Christmas and Pancasila, all colors united and continued. “All sustenance can be shared for the happiness of a pluralistic Indonesian life. From our deepest hearts we wish you a merry Christmas and a new year. Peace in your heart, peace on earth. And I wish all beings happy and safe,” he said. 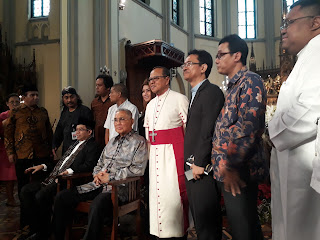 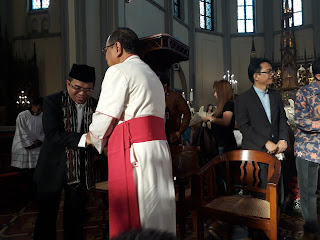 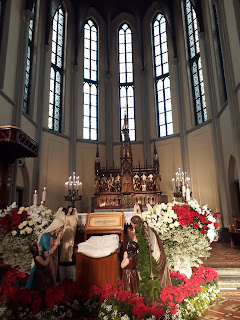 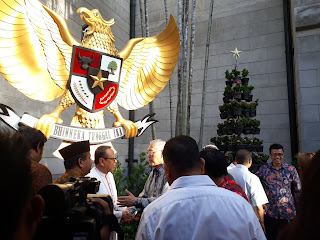 With the experience of covering Christmas at the Cathedral, I appreciated diversity even more. There is no need to hate or even be hostile who are different from us. Just end the debate about the Merry Christmas greetings. It is enough to respect that difference. And love each other regardless of what religion they come from. Then peace will be created.

A very impressive experience for me. Alhamdulillah.