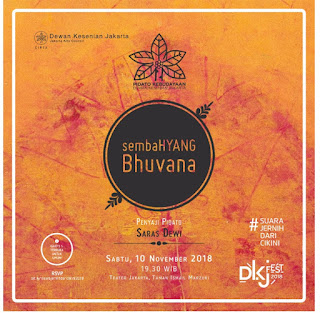 The thing that I should be most grateful for now is being able to watch the 2018 Jakarta Arts Council (DKJ) Cultural Speech live at the Jakarta Taman Ismail Marzuki Theater (TIM), Saturday (10/11/2018) night. Usually every year I always watch the video on YouTube. Alhamdulillah, what was also encouraging in the 2018 Cultural Speech was the presentation. She is one of the women I idolize and admire. She is Bali Lembayung a.ka Saras Dewi or Ms. Yayas. 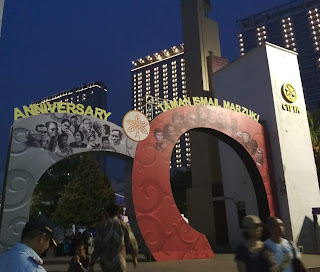 Not only fascinated by the riveting material Ms. Yayas presented. But also fascinated by her friendliness, humility, and beauty. Asli, she is really beautiful. To me she is an almost perfect female role model; very smart, beautiful, kind, friendly, religious and down to earth. After the speech, everyone surrounded him. Some asked for a photo and autograph. He also patiently fulfills everyone’s request. When my friend and I approached him, he said, “Wait, please. Don’t come home yet.” Because he has to serve one by one people who ask for a photo together and an autograph.

My happiness doubled last night. Apart from hearing a great speech, I can also take photos together and get autographs on the book containing the text of the speech. Happy batsss anyway.

I said to him, “Ma’am, I’ve read your book, you know. But I didn’t bring it so it couldn’t be signed (I forgot I sold the book for the Lombok earthquake donation).” Then he warmly replied, “Oh, just come to campus, OK?” Really friendly right. 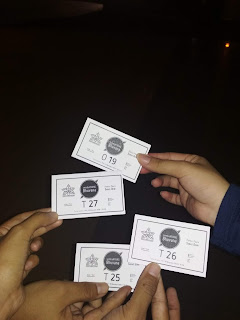 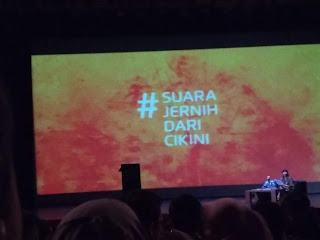 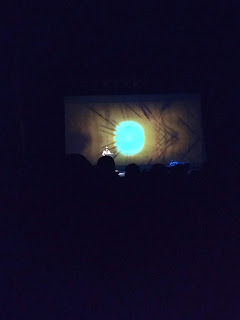 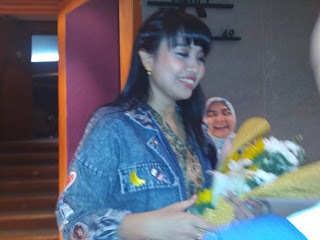 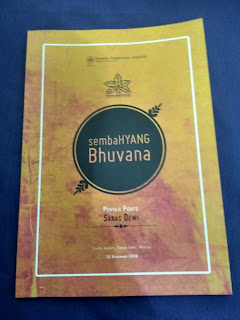 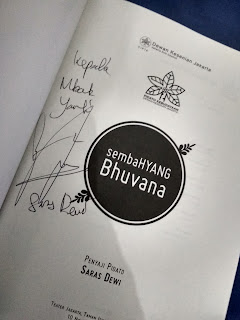 Talking about the content of Ms. Yayas’s speech, she delivered a speech entitled “SembaHYANG Bhuvana”. The content of this speech is not far from Ms. Yayas’ concern so far as an environmental activist and her knowledge in the field of environmental philosophy. In his speech, he emphasized how technology has a big influence on changing the relationship between humans and nature. So far, nature has often been used as an object by humans under the pretext of development. Though nature itself is the subject. Nature has given a lot. But then humans did a lot of destruction because they felt they had control over nature. The theme presented is not much different from what I have read in his book, Ecophenomenology.

With a poetic narrative, a sweet and gentle voice, Ms. Yayas brings us a reflection on our attitude towards nature or the environment around us. He opens our consciousness to always be in harmony with nature, with the will of nature. Thus, there is an equilibrium in the relationship between man and nature.

Mbak Yayas also talked about the reclamation of Benoa Bay. He fought with the Balinese people against reclamation. Benoa Bay for him is his beloved lover. He also told how he initially fell in love with the bay, which has been the source of life for the surrounding residents.

One of the things that interests me is the discussion about eco-feminism. Ecofeminism is a movement that criticizes how knowledge has been built with the intention of making nature inferior. Ecofeminism strives for a world that is no longer sick with inequality, oppression and hatred. He also described the progress of an eco-feminist figure from India named Vandana Shiva. Such an inspiration. I increasingly wanted to learn about feminism and its various movements.

Looks like I will find it difficult to move on from Ms. Yayas’s speech. So inspiring. Very enlightening. On the way back from Taman Ismail Marzuki, I felt that I loved nature even more. But of course love is not enough. How to love with all the responsibilities to look after, that’s what is important. Just start from yourself first, at least don’t litter, switch to using ecogreen products, and reduce the use of plastics. We do need radical or revolutionary ways to restore the balance of nature that we have completely tarnished, but at least start with ourselves first.

At the end of this article I will quote the opening speech of “SembaHYANG Bhuvana” which is very beautiful. In the middle of her speech, Ms. Yayas also inserted poetry by Hindu poets and also sang a song on the theme of rejecting the reclamation of Benoa Bay. At the end of the speech, he also read his poetry. Superb! Super cool! She still amazed me! You are such an adorable person, Ms. Yayas! As a woman, I am super proud of you!

There is no guile in nature. Nature is the delusion of the eternal, all that is pure and good. Nature is not only the earth that is stepped on, a place of shelter, but also a historical space for humans. Nature pours its essence to support life, no exception, humans also depend on it.