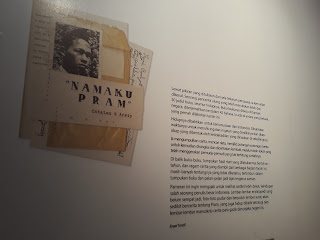 One day, long ago, I remembered that one of my virtual friends once said, “It’s a sin to delay reading Pram (Tetralogy Buru).” I know the book and I have it even though it is borrowed and incomplete, but unfortunately I haven’t read it until the second I write this article. I admit, my ‘sins’ are getting pile up in this way.

Pramoedya Ananta Toer is a legend and everyone agrees. Although maybe not all Indonesian citizens know him or at least know about him.

I have a friend or parent from Norway who was very enthusiastic about getting me to read Pram about 13 years ago. He obliged me to read Pram and even at that time sent me a review of Pram’s book in English. Through Pram’s work, he became acquainted with the socio-political conditions of Indonesia at that time which became the background for the story of Buru’s Tetralogy.

For me, Pram is someone who is stubborn, stubborn, steadfast, and has the courage to speak up. That’s what I caught after reading Pramoedya Ananta Toer’s book Close to Once, written by Koesalah Soebagyo Toer. 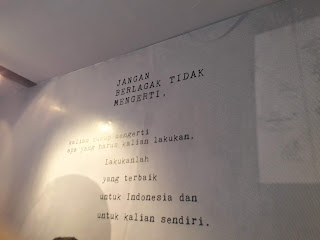 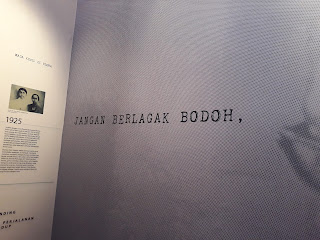 I want to know Pram more deeply. And in the end I had the opportunity to visit the exhibition “Namaku Pram” at Dia.Lo.Gue Kemang, South Jakarta on May 26, 2018. Here we can see Pram’s daily life through the things he wears as well as photo documentation and notes.

In this exhibition, a timeline of Pram’s life is displayed from his birth, childhood, youth, to the end of his life or in the 1925-2006 timeframe. His books which were published for the first time are also displayed in glass cabinets. There are exhibition properties that can be photographed and some are prohibited from being photographed.

His first published book is on display among them; Perburuan (1949), Midah Si Manis Bergigi Mas (1959), written manuscripts written around the 1960s after being released from prison for writing the book Hoa Kiau in Indonesia, Guerrilla Family (1962), Once Incident in South Banten (1980), Subuh (1961), Chronological Summary of Publications about Pramoedya Ananta Toer and His Work 1947-1985 and Tjerita Dari Jakarta (1957). 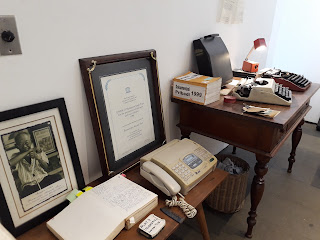 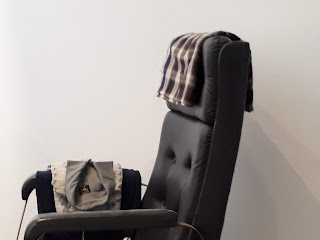 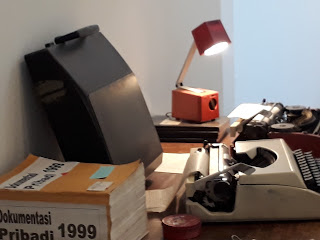 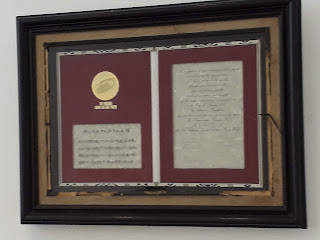 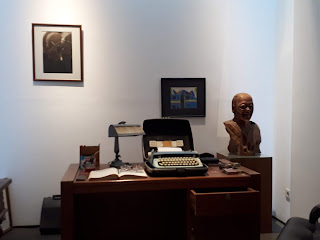 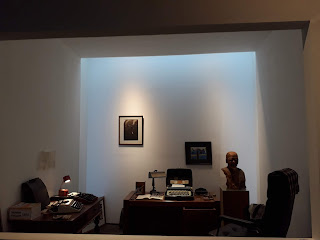 After going through the timeline, I went through the photo documentation and notes that Pram wrote when he was exiled on Buru Island. There is one of Pram’s photos during his first year on Buru Island. In the photo, he is wearing a white shirt and sarong, walking in the middle of the rice fields with someone wearing a hat.

Pram is a neat person in documenting his life experiences. He recorded his activities on Buru Island in a notebook with a purple cover with the Swan brand number 1. I used to see this brand book as a child. There, Pram wrote a story on the island of Buru with the title Sidelines of Life in the Hinterland of Buru. He shared his experience of meeting the people of Buru accompanied by black and white photographs and neat handwritten captions.

On a screen there are photos of Pram and his activities including his family. Visitors were also presented with photos of her house in Blora, photos of her wedding with Maimunah and photos of her children. There is also a timeline of Pram’s life from his childhood, when he was young in Jakarta, intellectual highpoints, and his time on Buru Island.

I was sad and wanted to cry when I read the postcards that Maimunah and Pram’s children sent when her father was imprisoned in Buru. There were quite a number of postcards on display, including one from Maimunah Thamrin during 1961-1976.

Ajahanda how is he now? (Titiek prays that the ajahanda is healthy). Ajahanda Titiek in October after the exam was about to be hospitalized, pray for this son of yours who always misses your friend.

There are also letters from Ariana Ananta Toer in the period 1971-1977, Ananda Rita Ananta Toer, Tatiana Ananta Toer, and Yudistira Ananta Toer. The postcards were addressed to the address Unit I Wanapura Photo Number B41. I was sad and wanted to cry again when I saw a photo of Pram hugging and kissing his children. I imagined how much a father longs for his children and vice versa when they are separated for so long. 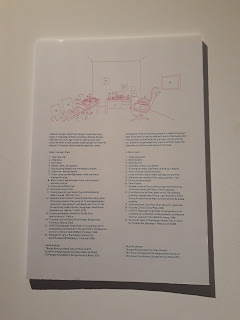 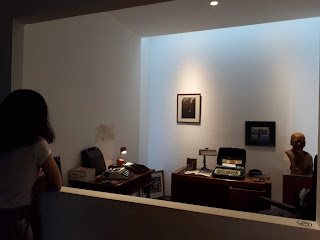 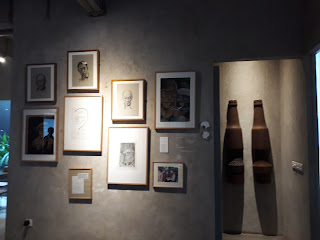 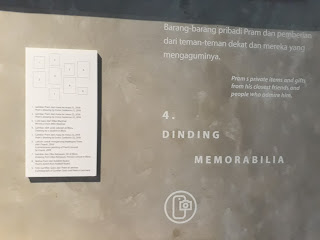 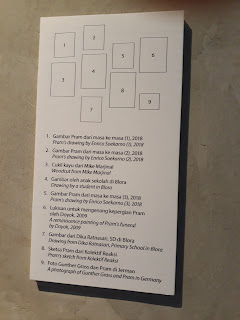 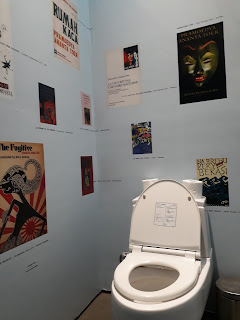 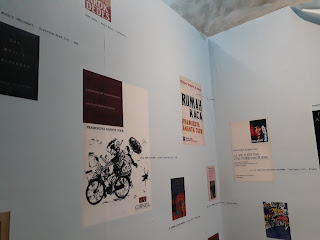 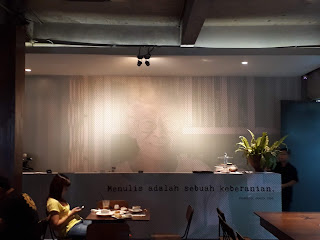 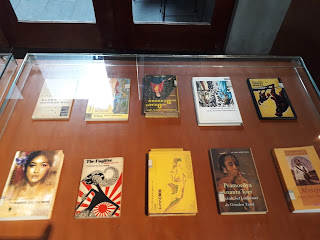 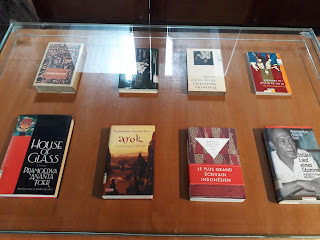 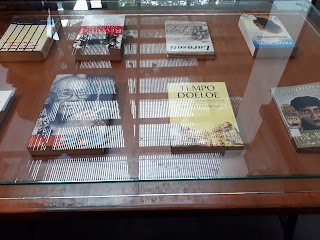 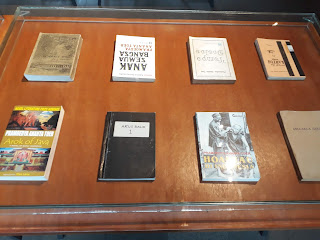 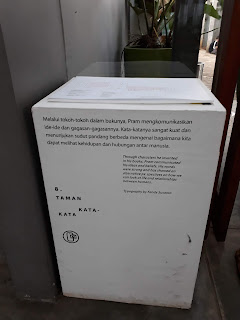 Visitors can also see through video screens of interviews with several members of Pram’s extended family. They told about Pram’s daily life and his interactions with his family. Hilmar Farid, Harun Sulaiman, Asmara Abigail, and Budiman Sudjatmiko also gave videos of opinions about Pram. Unfortunately, visitors have to queue in this section and I am forced to skip this section.

Then I went into the archive room. Here are stored scraps of unused typed texts. And on the back of the paper is used to type the Geography Encyclopedia manuscript. Also exhibited are handwritten texts in a written book about Indonesian people and Indonesian history written on the island of Buru. Pram’s postcard for his son Yudistira Ananta Toer or as he is called Gus. The postcard was sent on October 6, 1972. Pieces of Pram and wife’s plane tickets to Hong Kong on March 19, 2003. A photo of him and his wife and Nobel Prize winner Gunter Grass. Her and colleagues’ business cards and medals for awards such as the Ramon Magsaysay Award.

In addition, photos with family are also exhibited; children, grandchildren, wives and the time he was with his wife and accompanied by notes in old typed paper with the title The Years of a Grandfather Dying.

“Whoever is ever born will end up serving a death sentence. It doesn’t matter if he is a bastard or a prophet, a great statesman or a tramp with only one leg and two supporting sticks.”

“In the end life is like this,” he muttered. “The ideal of a better life tomorrow … where is it all now. In crumbs and the rest of his life is zero. Romance towards the future, wow, in fact it is only good for politicians’ merchandise, which itself is not. never sure of his own words. “

“Again he nodded. Once again without muttering. Not out of surprise at his own grumbling; suddenly he realized there was a me in him who no longer needed denial, approval, or invitation. The me with himself seemed to be ready. one unity. Without a plan he began to step into the world of metaphysics. Bah! He shook his head quickly. “

At the rear of the exhibition site, Pram’s workspace and frequently used items such as typewriters, sarongs and books were also installed. Even in the toilets where the exhibition is located, the walls are covered with posters of Pramoedya’s bibliography. 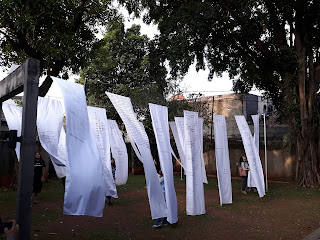 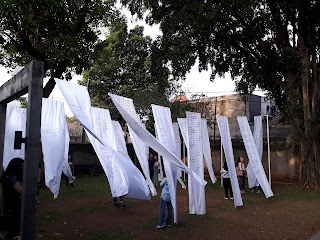 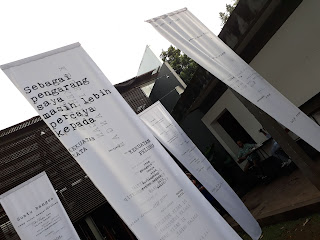 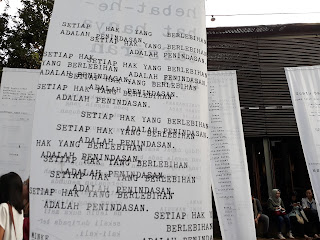 Oh yes, in the front of the exhibition room there is also a maroon bag that Pram brought when leaving Buru. The bag reads PAT Jakarta 28 9 79. Nearby is a white T-shirt that Pram used to wear during his lifetime.

Pram not only has to be known by name. The quotes are quoted. But his works must be recognized and traced. Absorbed life force and resistance energy. That’s at least how I or we as young people appreciate his invaluable services, not only for the world of literature but also for the Indonesian people.

“The misery made me realize that I really am alive. If I were always luxurious, maybe I never felt that I was really alive.” 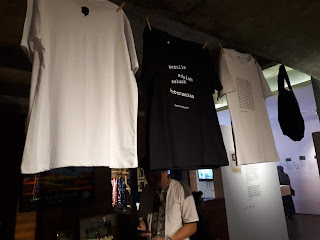