Book Review “Until Death Separates Us” by Mira W.


 Book Review “Until Death Separates Us” by Mira W.

Book Review “Until Death Separates Us” by Mira W. 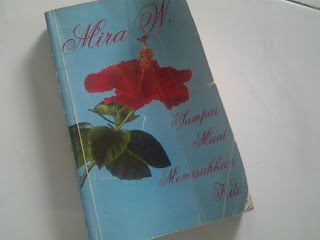 Title: Until Death Do Us Part
Publisher: Gramedia Pustaka Utama
Year: January, 2002 (Sixth Edition)
ISBN: 979-511-562-6
This is the first time I read Mira W. A name that I often read at the opening of a soap opera where the soap opera is lifted from his book. The first impression of reading this book is like enjoying a soap opera show. A predictable story where it flows, how the story line is. Very typical soap opera.
Until Death Separates Kita tells the love life of Febrian Budiman. The failure of his household with Inge, his schoolmate when he was still studying at the Faculty of Medicine made him traumatized and left a severe psychological impact even to the point of experiencing impotence.
When Inge gave birth, the child was stillborn and had a shapeless deformity. From there he was deeply traumatized until they finally separated, even though he was not officially divorced. Febrian then moved to Los Angeles, continuing his studies. In LA, he meets The Blue Angel or Mary Teresa Wilson, a wrestler (wristler) erotic.
Angel or Tessa managed to make Febrian recover from his illness. They love each other and live together in a flat. Their relationship grew closer and finally Febrian brought Angel to Jakarta, introducing him to his parents. Febrian also returns to Jakarta in order to settle his divorce from Inge. But after meeting Inge, who has now become a successful career woman, Febrian’s old feelings grow back.
The relationship between Inge, Febrian, and Angel is getting more complicated. Although finally Febrian and Inge got back together, his feelings for Angel never changed. Unbeknownst to her, Angel was also pregnant with her child. But forced to return to LA after Febrian hurt him.
The story is getting longer. Like soap operas. There is also another character included in this story, Agus, who is suspected of being the biological father of his child with Inge, who is named Angel.
There are many medical terms in this book, because as far as I know Mira W. is a doctor, the explanation is quite detailed. I finished reading this book in just a few hours. Even though it’s not my favorite genre, I’m curious enough about the story so I quickly finished it. The 12th book I read in 2017.