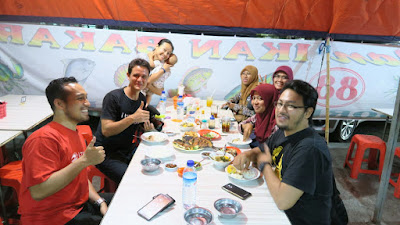 “Mark, I wished you would stay longer here in Lombok. Then I will invite you to my house and cook the meals for you and family,” I said to Mark Wiens before we were about to part.

Mark was only two days in Lombok and we had a short time to meet, at the end of August 2017. My meeting with Mark was a dream come true. I never thought I could meet that international food vlogger. Totally unexpected.

I have been following Mark on YouTube for a long time, from the hundreds of thousands of subscribers to now it has reached more than two million. Around 2014, I got to know Mark. After work, watching the video is an entertainment to unwind and get tired. Until one day I fantasized, “Hopefully one day I can meet Mark. Have a meal together and take a walk in Lombok.”

The prayer was answered. In August 2017, I opened Instagram and it turned out that Mark was in Bali. I also casually commented on his upload asking him to come to Lombok. I assured him that in Lombok there was a lot of good and spicy food, according to his taste. I didn’t think that he replied to my comment and joked me via inbox. I was very happy at that time.

We also made an appointment to meet at a roadside seafood stall in the city of Mataram at night. I also invited Nunung and Ros, my former workmates, to meet Mark. Excited and embarrassed at first The first impression of the meeting, Mark, and Ying, his wife, they were very humble and friendly. He’s very kindhearted person. There is also Mark and Ying’s little son, Micah. Micah’s very cute. Ying is mostly silent but always smiling friendly. 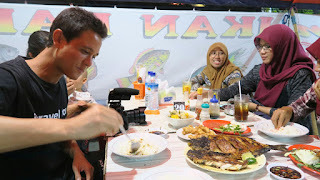 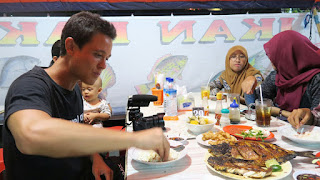 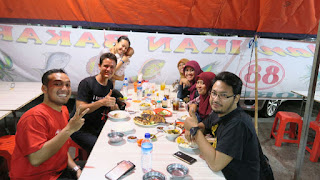 We enthusiastically heard stories from Mark. Of course, while eating and watching the video shooting process. All meals paid for by Mark. Thanks for that, Mark. Hehe

A month later we also appeared on Mark’s video. Videos of his visit to Lombok and what foods he tasted during his three days in Lombok.

Mark is an international food vlogger who always gets positive feedback from netizens. He is always praised for his well-mannered attitude. He never gives negative comments on the food he has tasted. Maybe for Mark, there are two kinds of food in the world, delicious and very tasty. 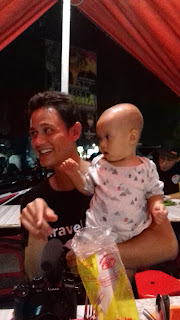 Mark has recently received a lot of praise for his Africa series videos. Mark is considered to have contributed greatly to promoting countries in Africa which so far have often received negative stigma from the Western world. In the African series, Mark visited Ethiopia, Ghana, Kenya and Rwanda. In fact, many have suggested Mark to be a UN Ambassador. Hehehe

Meeting Mark, Ying, and Micah was one of my best moments in 2017. I didn’t think that the dream that I thought was impossible could come true. Hehe