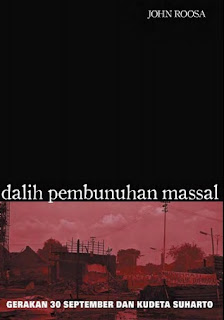 I just finished reading the book Pretend for Mass Murder; The 30 September Movement and the 1965 Suharto Coup by John Roosa. I started reading this book if I’m not mistaken since July, about four months. I read it in installments little by little so that I understand better because this is a history book. I also read other books so it will take a while to finish.

I love reading history books. Especially about the G30S incident which is still covered in dark fog. So far, we, especially myself, only know about the incident from history lessons at school, what we know is that history textbooks that are used as a reference for material in class are taken from only one source, namely the government.

Finally, I found Mr. John Roosa’s book, I got new insights about this dark history. After reading the book, I concluded that what happened in 1965 was the General Council vs. the Revolutionary Council.

The General Council consisting of high-ranking army officers planned a coup to overthrow President Soekarno. But according to them Soekarno could not just be overthrown because he had great support from the people. Finally, a plan was drawn up for Soekarno to step down, but the cause of his resignation was the PKI. At that time the PKI was one of the parties that had large masses in the regions.

The coup plan reached the ears of the PKI CC Chairman, DN Aidit. Through Sjam, the Chairman of the Central Specialist Bureau, which had intelligence or informants in the army, was asked about the plan. Aidit wanted to act to prevent the coup and protect Bung Karno. A Revolutionary Council was formed to block this plan. Initially it was proposed that this council be called the Military Council but Aidit rejected it and changed it to the Revolutionary Council.

Based on the sources presented in this book, the order of the Revolutionary Council was only to kidnap the general and bring him to the president to be confronted about the coup plan. But somehow then there was a murder.

The movement failed with all its limitations, one of which was the weakness in the command system of the Revolutionary Council. Especially after the generals were killed. PKI was asked to take responsibility. Soeharto appeared to take advantage of the situation.

Supposedly those responsible were the PKI central management who were involved in planning against the Council of Generals, but it is very unfortunate that all PKI members who arrived in the regions were also massacred without undergoing a judicial process.

That’s the point I got from this book.

Hopefully this dark history will never repeat itself.

“You are Badass” Book Review