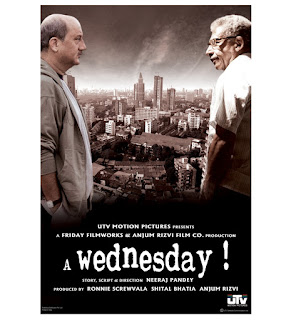 Acts of terrorism often victimize civilians, innocent people. The rampant acts of terror in his country made one resident feel restless and did not live in peace. He is worried that at any time his closest people and loved ones will become victims of acts of terrorism. A citizen who calls himself a commoner or The Common Man (Naseeruddin Shah) is obsessed with killing convicted terrorists who are jailed in Mumbai.

This man also devised a way to get the four convicted terrorists out of prison and finish him off. The four terrorists are Ibrahim Khan (KP Mukherjee), Iklhlaque Ahmed (Rohitashv Gaur), Mohammed Zaheer (Vije Bhatia), and Khurshid Lala (Mukesh Bhatt). He also acts as a terrorist by terrorizing the Mumbai police commissioner, Prakash Rathod (Anupam Kher).

The Common Man’s behavior made the police panic. On Wednesday, The Common Man lied to police that he had planted bombs in several places. He gave the police several hours for his request to be fulfilled. If not, the bomb will be detonated. His initial request was to release four convicted terrorists jailed in Mumbai.

In order for this case to become excited and can be witnessed by the public, The Common Man ordered Naina Roy (Deepal Shaw), a journalist from the UTV station to provide a live report. By telephone, The Common Man interacts with the police. He made the police frantic. Prakash Rathod also mobilized his entire ranks including his trusted police officer Jai Singh (Aamir Bashir) and also Muslim police, Arif Khan (Jimmy Sheirgill) to look for traces of The Common Man hiding on top of an unfinished building.

After knowing the motive for the terror that was presented to the police, Prakash wanted to arrest The Common Man in person. Can he catch and try The Common Man? “This case is unknown to anyone. But, in my memory, ” he said while sitting on the beach after he retired from his post.